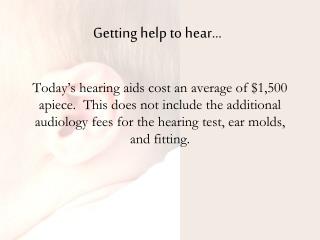 The Patient Care Program brought together Myrna and Austin, her hearing dog. Today’s hearing aids cost an average of $1,500 apiece. This does not include the additional audiology fees for the hearing test, ear molds, and fitting. The Patient Care Program brought together Myrna and Austin, her hearing dog.

The Patient Care Program brought together Myrna and Austin, her hearing dog.

Jewelry Buyers Austin - Jewelry buyers austin will give you a fair price for your unwanted necklaces, bracelets, rings

Background - . program must be brought into memory and placed within a process for it to be run. input queue –

Nurse staffing for safe patient care? - . why aren’t we there yet ?. the evidence. nursing workload and patient care:

NURSING CARE FOR PATIENT WITH WOUND - . by purwaningsih. break in skin or mucous membranes. what are wounds ?. injury to