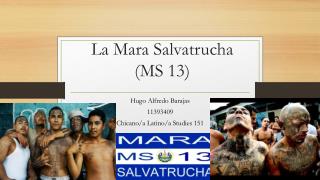 MS-13 National Gang Task Force - . us overview. ms-13 and 18 th street were both founded in los angeles. the greater los

By Mara and Claire - . what is e-waste?. e-waste (electronic waste) comes in many forms and is generated by business’s

Introduction – Maasai Mara - . l ocation. the  maasai mara is a large  game reserve in south-western  kenya it is

THE MAASAI MARA - . the land and people blessed by god by mikaeel ahmed class 3g. the land

Uranus By Mara - Is the 7th planet from the sun. it is very cold on uranus and there is no oxygen. group: me, davis,

MARA-MARA - . description of the activity. we are going to offer a large variety of activities related with fun, sports

Gang Awareness - . health 9 coach prahl. warm-up activity. on a sheet of paper, write your opinion to the following

Gang Presentation Bill Mertig, RCPD - . this is a presentation that was provided to me by a friend at the fbi. i hope it