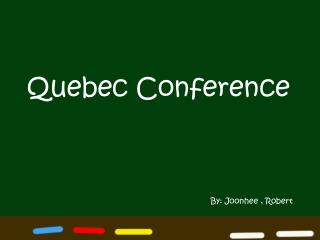 Quebec Conference. By: Joonhee , Robert. What is Quebec Conference?. When: October 10, 1864 Where: Quebec city Who: 33 delegates of Canada, the three Maritime Provinces of Nova Scotia, New Brunswick, Prince Edward Island and the colony of Newfoundland

Quebec Nationalism - . duplessis era. from 1936-39 and 1944-59 quebec was controlled by premier maurice duplessis and the

CSI – Quebec 1759 - . the death of general wolfe. based on the evidence of the death scene you must determine who got

Quebec - . quebec is a province in east central canada.it is only canadian province with large french speaking population

Mortgage Brokers Quebec - Are you looking for bets mortgage rates in montreal? you are at right place we are the leading

QUEBEC 2014 - . may 4-10. purpose. gives students a genuine opportunity to put use their french conversational skills in

Quebec City - . the history, culture, and landmarks. only city in north america to have the original defensive city walls

Quebec - . this is a picture of quebec. quebec &amp; minama are alike. quebec and minama both have some mountains.

QUEBEC 2014 - . may 3-8. purpose. gives students a genuine opportunity to put use their french conversational skills in a

Quebec Food - Where you need to eat in quebec, and what you have to get there. quebec food. poutine is a common food that

Quebec Dissatisfaction - . for the french, confederation was a compromise (saw it as a way of gaining control over things