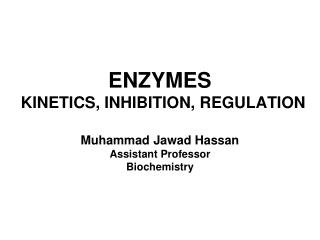 LECTURE 2: ENZYME KINETICS - . general principles of catalysis. a catalyst lowers energy of activation by providing a

Welcome to class of Enzyme Kinetics and Inhibition - . dr. meera kaur. learning objectives. to understand the

Enzyme Kinetics - . enzymes are proteins that can accelerate biochemical reactions by factors of 10 5 to 10 17 ! this is

Inhibited Enzyme Kinetics - . inhibitors may bind to enzyme and reduce their activity. enzyme inhibition may be

Glycolysis - . anaerobic degradation of glucose to yield lactate or ethanol and co 2. learning objectives. sequence of