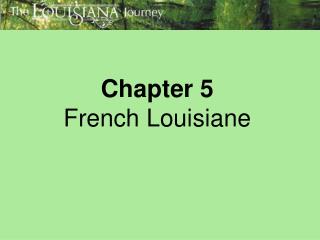 The French and Indian War - . chapter 3 section 4. in the early 1500s, the french began to explore north america. jacques

Chapter 18 The French Revolution And Napoleon 1789-1815 - . section 1. the french revolution begins. a. background to the

Chapter 2 – Causes of the French Revolution - . explain the concept of absolute monarchy. how did absolutism tend to

Chapter 11 - . the era of the french revolution: affirmation of liberty and equality readings: page 292. primary source.

Chapter 10 B - . diplomatic and political relations. ____________ trouble the nation . american revolution triggers the

Le Français en Louisiane - . this semester, we have learned that many of the acadians fled to louisiana during the

The French Revolution - . chapter 21. learning objectives for chapter 21. after reading and studying this chapter,

Chapter 5 - . language. norman invasion: 1066. french influence on english: during the norman occupation, about 10,000

War and Peace Chapter 5 - . how did military events and their consequences contribute to the foundations of canada.