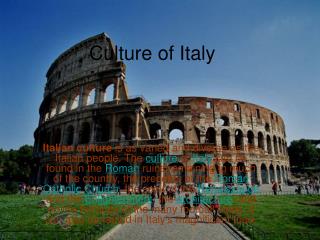 CULTURE SHOCK IN ITALY - Culture shock is a very real thing, regardless what we have access to through the internet,

Unification of Italy - . ch 16. sec1. nationalist in italy. italians were inspired by the french revolution. congress of

Unification of Italy - . unification of italy. 1848 uprising - not successful for italy. still not a “nation” austria

UNIFICATION of ITALY - . terms:. risorgimento = “resurgence” name given to italian nationalist movement in the 1800s

HISTORY OF ITALY - . a brief introduction to the birth of the italian state. 1600-1815. italy remains split into a dozen

UNIFICATION OF ITALY - . “italians” dominated the world in history-when was that? the peninsula that is now italy

UNIFICATION OF ITALY - . introduction:. after the congress of vienna, italy was fragmented into states of various sizes.

Wines of Italy - . the romans. around 300 bc the consumption of wine was popularized by the romans they introduced props