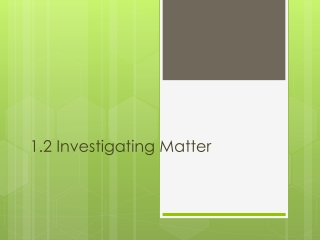 WHERE - . do you think they were?. investigating ancestral locations online. by malcolm fowles . beyond namespotting.

Matter Matters - . matter, matter everywhere except in a vacuum of course chemistry is the study of matter its changes

Matter and Measurement - . earth science intro unit. i will be able to define matter and describe how the properties of

The Cycles of Matter - . why and how is matter recycled in our ecosystem?. cycles of matter. all things in nature are

Matter &amp; Properties of Matter - . matter. anything that has mass and takes-up space the quantity of matter

What’s the Matter? - . the matter is everything!! states of matter; solids, liquids, gases classifying matter according

What’s the Matter? - . the basics. what is chemistry? what is matter? how do we measure matter? mass = qty of matter in

Matter and more - . matter, atoms, and the periodic table. in this unit. properties of matter p hysical/chemical

Investigating Atoms and Atomic Theory - . students should be able to: describe the particle theory of matter. ps.2a use

What’s a Matter? - . what is matter?. matter : anything that takes up space and has mass atom : basic unit of matter

Matter - . what is it?. matter. matter is anything that takes up space!! ! matter is everything around you. matter is

Matter - . mrs. horn 5 th grade science 2 nd nine weeks. what is matter?. matter is all around you matter is anything

Investigating the past - . studying history involves investigating what happened in the past and why. people who study

Properties of Matter - . matter . anything that has mass and takes up space matter can take many forms and is not always