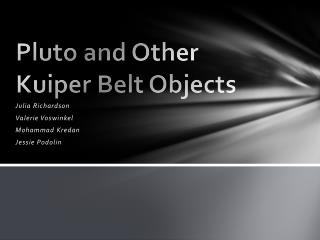 Pluto and Other Kuiper Belt Objects Pluto and Other Kuiper Belt Objects. Julia Richardson Valerie Voswinkel Mohammad Kredan Jessie Podolin. Basic Properties. Neither a terrestrial or jovian Rocky dwarf planet Tilt: 199.61 degrees Direction of rotation on its axis: clockwise (also referred to as the opposite direction)

Pluto and Other Kuiper Belt Objects

Chapter 6 Objects and Classes - . she calls out to the man on the street sir can you help me … oh think twice it's

Goju Ryu Karate-Do - . click here to begin. created by peter gilligan. select the grade you are training for. 8 th kyu

Direct and Indirect Objects - . 3-10 p. 132. direct objects. as you know, every predicate contains a verb. some