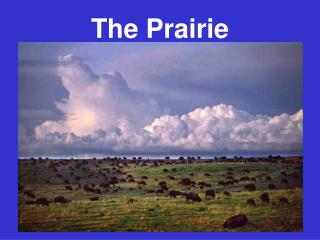 The Prairie. What is the Prairie?. Grassland Usually temperate climate. Usually intercontinental. Relatively flat. Prairie. The word prairie is derived from the French word “prataria”, or meadow, which probably originated with the Latin word “pratum”.

The Prairie Plains - . by nadav koller and yoni nesher. map of the prairie plains. physical features. lots of gas and oil

The Prairie Wedge - . by: james martinsen. introduction. the prairie peninsula is a wedge of prairie that extends from

Prairie - By: rachel ellis. prairie. some of the animals that live in the prairie are birds, buffalo, worms, butterflies,

Prairie - . by: vi and alexa. description. the prairie is a temperate grassland it has very few trees ,but lots of grass

Prairie Potholes - . wetlands of the mid-west. allison samuel. prairie potholes . according to the epa, they are fresh

Prairie Dogs - . by: jayden. my report is on prairie dogs. i am going to share with you what they eat, where they live

Tallgrass Prairie - B. a. match the climate diagram with the location on the map. write the letter in the circle on the