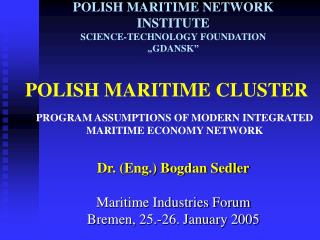 POLISH MARITIME CLUSTER - . use of resources and possibilities of baltic sea and vistula and odra river s’ basin s

Polish … - . art has always been a big part of our lives. by art we can

R&amp;D AT THE MARITIME STUDIES - Terminal simulator - a successful r&amp;d project at the maritime studies jouni

POLISH FOLKLORE - . prezentacje uczniÓw. krakow folklore . krakowiak is the most popular dance, which became a polish

Polish Dances - . polonaise. polish representative national dance. depending on the region, polonaise was known under

Polish legends - . legend about lech, czech and rus (how the land of poland started to exist) legend about popiel and

Polish team - . primary school in legionowo. the republic of poland is a country in central europe. legionowo our town is