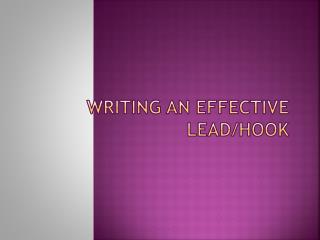 Writing an effective lead/hook. What is a Lead/hook?. *A hook is what grabs the attention of the audience in a piece of writing. *Good writers know that it is important to catch their audience’s attention right from the beginning.

Happy Hooks - . how to develop a hook for essay writing. what is a hook?. an essay hook usually comes at the beginning of

Writing Leads - . by: celeste gledhill. what is a lead?. a lead is the beginning of your story. a good lead catches the

Introductions and Attention Grabbing Leads - A lead: the first two or three sentences in your introductory paragraph

Leads Getting off on the right foot! (the key to writing effective leads) - Do now: what do you think that the first

Types of Leads - . summary lead. provides a summary of what the article is about 1-2 concise sentences. conveys

Writing Leads - . learning target. i can use five different types of leads to gain my reader’s attention. this

Leads - . creating an effective lead. sometimes getting started is the hardest part for writers. in the “i believe”

The Hook - Ask the audience a question. use a catchy phrase or quote. create a tongue twister. make an exclamatory

Hook, Line, and Sinker - . by jorge calle. in any writing form, be it essay, novel, non-fiction, a good introduction is

Creating Good Hooks in Writing - . what are hooks?. hooks are used in the beginning of your writing. hooks are a way to

Writing leads - . how you start is quite important. intro. in mass media writing, we refer to the opening paragraph of a

WRITING HOOK - The hook is the very first sentence in the essay, and a good one creates a lasting impression with the

Writing leads - . leads. this is the hook that grabs the reader. without the hook, no one will read your story. it is the

Writing Leads - . what is a lead? . a lead is the beginning of your story. it is also called the hook because it should

The Hook - . catchy composition clichés. ask the reader a rhetorical question. use a catchy phrase or quote. create a