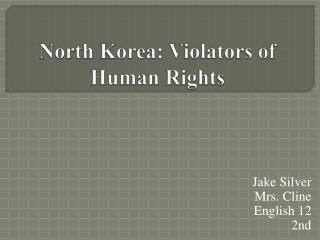 North Korea: Violators of Human Rights. Jake Silver Mrs. Cline English 12 2nd. Background of North Korea . North Korea is formed in 1953 Technologically has stayed virtually the same for the past 60 years North Korea is a communist country Still at war with the US and S. Korea. Economy. ACFID Disability-Inclusive Development - . human rights and quality of life. what are rights and how do they shape