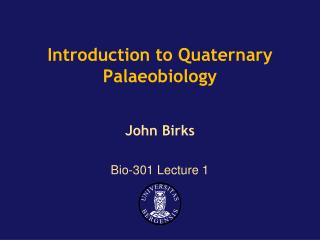 Introduction to Quaternary Palaeobiology. John Birks Bio-301 Lecture 1. Palaeobiology – used here as a general term to cover various aspects of the biology of the past based on fossil or sub-fossil remains of plants, animals, and organic compounds (‘markers’) preserved in lake or bog sediments.