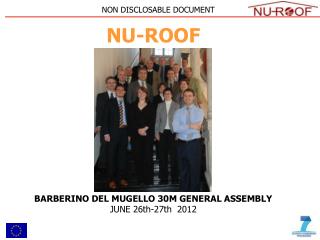 NU-ROOF - . schiphol meeting march 1 5th 2011. d’appolonia. objectives of this meeting. update of the test plan and

NU-ROOF - . supporting the roofing smes in the development and use of a new generation of roofing materials applicable

BCGCA3005B - . construct ceiling frames. intoduction. ceiling frame is the structure between the top of walls and the

38. What ladders are good to use around electricity? - . fiberglass aluminum metal and wood. fiberglass. 39. if you are

Math in Everyday Life - . ms. hills. use the following pictures to write a corresponding word problem. the roof of the

Engineering Concepts FINAL - . engineering structures. which of the following is a structure? a. bridge b. house c. dam

State of Connecticut Department of Public Works Roof Presentation Trends in Commercial Roofing - . what we hope to