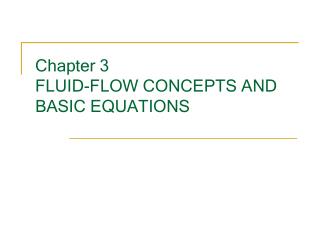 Chapter 3 FLUID-FLOW CONCEPTS AND BASIC EQUATIONS. The statics of fluids: almost an exact science Nature of flow of a real fluid is very complex Chapter 3 – Basic Kinetic Concepts - . inertia – resistance to acceleration (reluctance of a body to change its state

Basic Concepts 3 - . social and economic outlook for an aging society. the varieties of aging experience.

Chapter 3 Basic Concepts in Statistics and Probability - . 3.7 choice of statistical distributions. the distributions are

Chapter 3 Basic Concepts in Statistics and Probability - . 3.1 probability. definition: an experiment is a process that

Chapter 8 IDEAL-FLUID FLOW - . in the preceding chapters most of the relations have been developed for one-dimensional