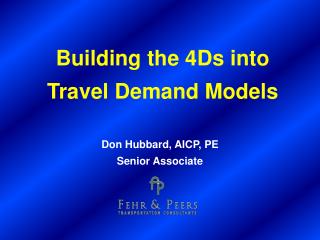 Building the 4Ds into Travel Demand Models. Don Hubbard, AICP, PE Senior Associate. Topics Covered. What are the 4Ds and why are they important? Insensitivity of conventional models to changes in 4D characteristics Adjusting a model to reflect the 4Ds – a case study from Sacramento

Ch. 4: Elasticity. - Ch. 4: elasticity. define, calculate, and explain the factors that influence the own price

Supply and Demand - . unit 1 reading: kw chapter 3,5,26. learning outcomes. students should be able to use supply and