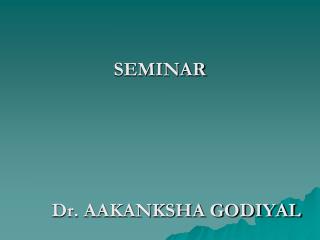 Jill Fisher Science Seminar Dr. Heyen, Advisor - Determining the chemical make-up of the flavoring of coca-cola and the

A SEMINAR PRESENTED BY DR. AA NEIDERMEYER - . initiate a pfp perspective develop a planning base establish a sequence of

Seminar with Dr. Chaim Rosenthal 5/9/10 - . symptoms of depression. does not love anything cannot enjoy anything