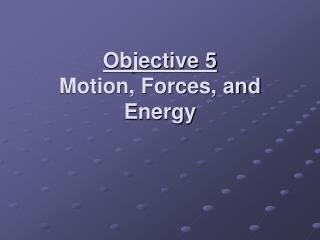 Objective 5 Motion, Forces, and Energy. IPC 4A – Calculate speed, momentum, acceleration, work, and power in systems such as in the human body, moving toys, and machines. Common measurements and symbols. Using the formula chart. 1. Circle what you are asked to find Motion, Forces, And Energy - . by: megan maxwell. click on the picture that best represents motion. no!! this picture is

Energy and Forces in Motion - . unit 1 physical science hs credit mrs. rubel. work, by definition, is the product of the

Energy and Forces in Motion - . physical science chapter 11 and section 1 of chapter 13. what is energy?. energy is the

MOTION , FORCES &amp; ENERGY - . taks review wake up and smile(:. ipc (5) the student knows the effects of on

Forces and Motion - 6 th grade unit becky berg what is gravity? gravity is the word we use to describe the pull between

Motion and Forces - . physical science chap 2 and 3. describing motion. 2.1. what is your current speed?. using the sun

Forces and Motion - . w hat is motion?. when a body is continuously changing its position with respect to the

Forces and Motion - . motion. the process of changing from one position, or place, to another. position. object’s

Forces and Motion - . go to score card. forces: 200. question: push or pulls are this in physical science. answer: what