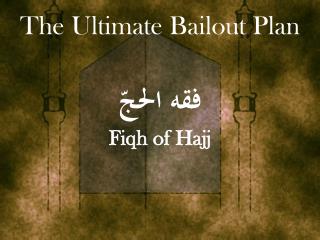 Welcome to idara Sunday School Hajj Experience 2014 - . madina. the hajj muslim pilgrimage to mecca. what is the

Hajj - the Journey of the Hearts - . morning of 8th of dhul-hijjah. ihraam clean yourself (ghusl) wear ihraam garments

Fiqh of Tahara-4 - . taught by: hacene chebbani. fiqh of wudu’(ablution). merits of wudu ’: being distinguished on

The Hajj - Remember because of translation makkah can have different spellings. the hajj. the muslim’s pilgrimage to

FIQH ISLAMIC JURISPRUDENCE - . hajj &amp; sacrifice. hajj. hajj is a fundamental pillar of islam which was

Hajj: In Body and Soul - . “he who came to this house (the ka’bah) (with the intention in performing hajj ) without

The Fifth pillar - . the hajj journey by: ryan, gavin, timmy, dj. what are the values of the hajj?. the values that the

What can you remember about the Kaaba ? - . the 5 th pillar hajj –pilgrimage. explain 4 reasons why muslims feel it i s

Eid-ul- A dha and Hajj - . by: azraf khan. how it began. during hajj, muslims re-enact when prophet abraham saw allah

Hajj : PILGRIMAGE TO MECCA- 5 th Pillar of Islam - . pillars of islam. oneness of god and belief in the last prophet