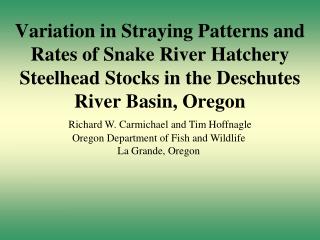 Oxaloacetate Supplementation - . modification of the nad+/nadh ratio to mimic calorie restriction an update for 2014.

FISH! Training Workshop for a Workplace Culture Change - The fish! training workshop by the training store helps you to

What is a Fish? - . what is a fish?. frogfish. hairy frogfish. goosefish. oarfish. antlered sculpin. cowfish. blobfish.

Understanding Wildlife Management - . wild birds and mammals are among our most valuable renewable natural resources

The Oregon Trail - . the route west a 2,000 mile walk or a year-long boat ride. the oregon trail was much more than a

Wildlife in the Modern World - This course is intended to provide an introduction to wildlife ... order tubulidentata