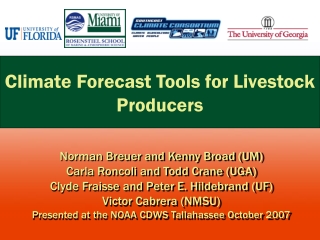 Seasonal Climate Forecast (Forecast Method) (Revised: May 26, 2012) - . this product is published by the oregon

Breeds of Livestock - . fall 2013. breed. animals of common origin having characteristics that distinguish them other

The Climate Test Bed - . mission to accelerate the transition of scientific advances from the climate research community