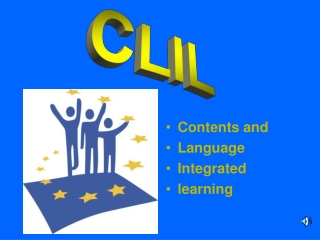 University students beliefs about language learning and the effect of a language acquisition course - Aim of the study.

Intercultural Language Learning - . provides a new purpose and pedagogical framework for teaching languages. is a

Language - . language as a critical phenomenon for cognitive science language separates humans from other animals

CLIL – Content and Language Integrated Learning - . clil. clil is a dual-focused educational approach in which an