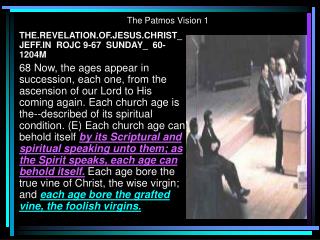 John Received the Revelation of Jesus Christ in Patmos - . www.jubileejoy.com. jesus in the midst of the 7 lamp stands.

Information Power Chapter 1 “The Vision” - . chapter 1 “the vision”. the mission. “the mission of the library

3 goals, 1 vision - Every one of us wishes that we live successfully, happily and peacefully with enough wealth, power,

THE VISION - . mohealthwins is a transformative process which can help missouri lead the nation in educational

The Vision - . to build a fundamentally-based club focusing on player skill development and creating a positive