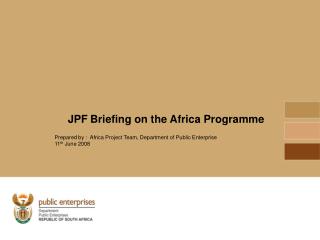 JPF Briefing on the Africa Programme JPF Briefing on the Africa Programme

CAP Glider Briefing - . all cadets are expected to complete the cap/ssa wingrunner course prior to participating tin

CRCT AFRICA TARGETS - . 1. what is the major physical barrier on the continent of africa? black sea sahara desert horn of