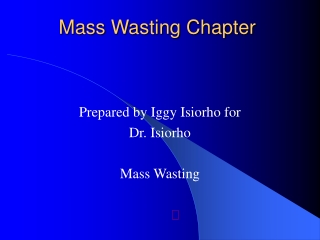 Chp14: Mass Wasting - Mass wasting (mass movement) -defined as the downslope movement of material under the influence of

Mass Wasting - . week 6. questions for discussion. would you live on a slope? if so, where? what level of risk from mass

Chapter 17 Section 2 - . masses of atoms. atomic mass. the nucleus contains most of the mass of the atom protons and