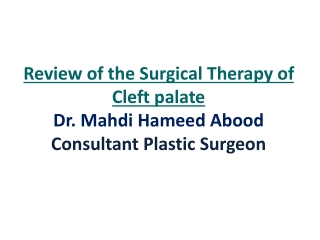 Review of the Surgical Therapy of Cleft palate Dr. Mahdi Hameed Abood Consultant Plastic Surgeon. The goals of treatment for cleft palate are to ensure the child's ability to eat , speak , hear and breathe and to achieve a normal facial appearance. Treatment involves Cleft Lip and Cleft Palate - . by: ashley dixon. causes. during the early stages of pregnancy, the upper lip and palate

Genetic Disorders Review - . what is the disorder?. chromosome 11 inability to manufacture melanin often shifting back

Cleft palate … .questions to be answered? - . there is no such thing as a stupid question .