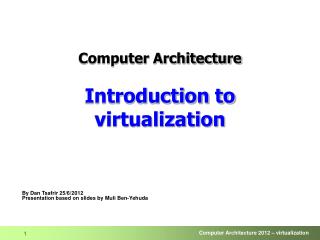 Computer Architecture Introduction to virtualization. By Dan Tsafrir 25/6/2012 Presentation based on slides by Muli Ben-Yehuda. What is virtualization?. Decouple software from hardware in a way that allows running multiple OSes on same hardware E.g., run both Windows and Linux on same laptop

A Survey of Virtualization Technologies - . ken moreau hewlett-packard. what is