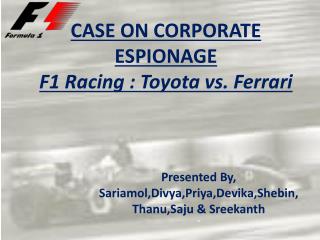 CASE ON CORPORATE ESPIONAGE F1 Racing : Toyota vs. Ferrari. Presented By, Sariamol,Divya,Priya,Devika,Shebin , Thanu,Saju & Sreekanth `. GLIMPSE ON THE CASE. Dec '03, the Italian auto giant Ferrari sued toyota charging that the latter had stolen the design for its formula one racing car. Ferrari vs. Lamborghini - . lamborghini vs. ferrari. who do you choose ?. ferrari 610 scagletti

A Corporate Counter-Espionage Approach - Bolstering the human firewall . presented by joel krauss. be prepared. for

Protecting against computerized corporate espionage - . how to harden your corporate practices. jarno niemelä

Espionage - . world war i. what is espionage?. intelligence activity that denotes the work of secret organizations whose

Toyota: a case study - . background. toyota motor company was founded in 1937 by the toyoda family. business was

Case Studies on Corporate Ethics - Both cases are important in respects of one's behaviour in the organization. the cases

Toyota Celica VS Mitsubishi Eclipse - . i am conducting research to inform myself and others on car manufacturers and

SEMINAR ON F1 CARS - . introduction. most sophisticated vehicles used in the most technologically advanced form of