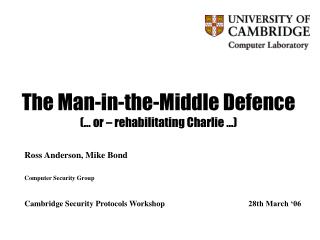 The Man-in-the-Middle Defence (… or – rehabilitating Charlie …) The Man-in-the-Middle Defence (… or – rehabilitating Charlie …)

Coronial and related issues in the Australian Defence Force (ADF) - . overview of defence policy on adf deaths since wwii

Charlie the Weather Boy - . by erica ousley. once upon a time, there was a boy named charlie who loved to learn about

Transparency and accountability in the management of defence - . dr. andrzej karkoszka acting undersecretary for defence

We hope you enjoy our book reviews! - . from the fifth grade class at nichols middle school in buffalo, new york. coaty.

Say NO to Ballistic Missile Defence - . an educational resource for concerned canadians researched &amp; prepared by