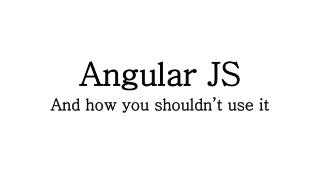 Angular JS. And how you shouldn’t use it. Once in a blue moon…. One day our customer came to us and said that he really wants to hire 3 senior developer for at least a month. And we hired 3 juniors…. Scope Pollution. Scope Pollution. Angular JS Development - Angular js is an open-source, web application framework that is maintained by google. it assists

Introduction to Angular Js - Angularjs is a structural framework for dynamic web apps. it lets you use html as your

Angular JS Development Company - Angular.js - one of the leading open-source javascript based framework is prominent for

What Is Angular JS ? - Naresh it is the best software training institute in chennai for java, angularjs, c#.net, asp.net,