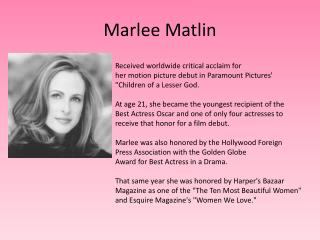 Marlee Matlin. Received worldwide critical acclaim for her motion picture debut in Paramount Pictures' "Children of a Lesser God. At age 21, she became the youngest recipient of the Best Actress Oscar and one of only four actresses to receive that honor for a film debut.

Marlee had many encouraging words for teachers and parents of children with special needs. - Wsu student council for

by: Marlee Street, Layne Lohse, Chris Mercer, and Truitt Talent - . oklahoma. why was oklahoma one of the last states to

Deaf Culture - Dr. rachel brown. deaf culture. quotes. “deaf people can do everything hearing people can do, except

Famous People With Disabilities - . unit 6: increasing my self-awareness. me!. does having a disability mean you can’t

Introduction to Deaf Culture and American Sign Language - . a culture within a culture. history and