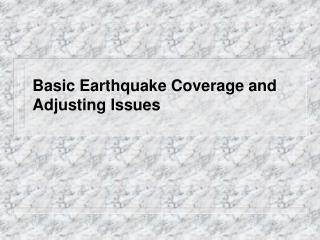 What do you think has happened here? - . walt recognise and sequence the features of an earthquake. interpret

Chapter 10 - . property and liability insurance. the bottom line. how much homeowner’s insurance do you need? cover the

Earthquake preparation - . watch the video about preparing for an earthquake in chile-

Earthquake Basics - . deadliest and largest earthquakes. did you know?. the swimming pool at the university of arizona in

Earthquake - . earthquake. an earthquake (also known as a quake , tremor or temblor ) is the result of a sudden release

Ch 03 The Matching Concept and the Adjusting Process - . 1. the matching concept 2. nature of the adjusting process 3.