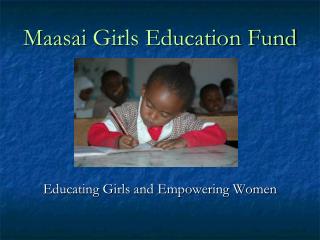 Maasai Girls Education Fund. Educating Girls and Empowering Women. Mission. To improve the literacy, health and economic well-being of Maasai women in Kenya and their families through education of girls and their communities. 48 out of 100 girls enroll in primary school Introduction – Maasai Mara - . l ocation. the  maasai mara is a large  game reserve in south-western  kenya it is

THE MAASAI MARA - . the land and people blessed by god by mikaeel ahmed class 3g. the land

Girls Education in India - Free education for girls in india from primary level to post-graduation at bhartifoundation.

Malala fund will promote elearning for girls - The gulmakai network, a new initiative of the malala fund, promises to

Maasai of East Africa - . who are the maasai ?. tribal group of eastern africa known for being hunters, warriors, and

The Maasai Olympics 2018 - Youthful morans, or warriors, compete for cash prizes in sports contests rather than hunt