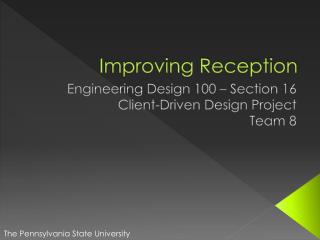 Improving Reception. Engineering Design 100 – Section 16 Client-Driven Design Project Team 8. The Pennsylvania State University. Presentation Synopsis. Positioning Statement What we want to do and how we’re going to to it Needs Analysis What we think our country needs Design Process Sensory Reception - . chapter 14. sensory systems. the means by which organisms receive signals from the external world

Electro-Reception - . calvin laverick. why the powerpoint calvin?. first seen in s1 e1 of “inside the animal mind”.

Reception Express - Friday 14 th march 2014. reception express. here are some of the things that we have been learning