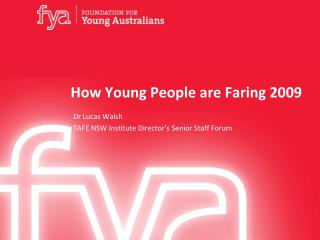 How Young People are Faring 2009

How Young People are Faring 2009

Reporting on I&amp;C status and recommendations to IAEA - Meeting of the iaea technical working group on nuclear

Accreditation and Young People with Special Needs - . moving forward together to ensure that every learner fulfils his or

Department of Social Policy and Social Work, University of York sarah.brooks-wilson@york.ac.uk - Should ‘transport

If I Die Young - . written by kimberly perry and recorded by the band perry presentation by casey philyaw. lyrics. if i

ENCOURAGING YOUNG PEOPLE TO SAVE MONEY - . introduction. on behalf of myself and commercial bank, i would like to welcome

Monitoring and reporting on how Victorian children and young people (0-17) are faring - . victorian child and adolescent

Monash University – ACER CENTRE FOR THE ECONOMICS OF EDUCATION AND TRAINING - . indigenous students and completion of

Young People and Smoking - Key questions. what are current patterns and trends in youth smoking?what do we know about why