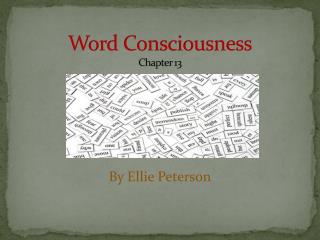 WORDS OF HONOUR - . chatterox – unit 3. coat of arms. to represent a person, a family or an organization. by

Frindle - . by: andrew clements. chapter 1: nick. nick is a kid who will get your teachers side tracked easily. he got

Chapter 13: Speech Perception - . the acoustic signal. produced by air that is pushed up from the lungs through the vocal

Consciousness and The 2 Track Mind - . chapter 3. are we always conscious of the things we do?. what are some examples of

Chapter 13 vocabulary - . journey. iter. noun: 3 rd decl., neuter. they were traveling. iter faciebant. -or “they were Word Play - . using pictures to play with language. word play. can you guess what each of the following pictures stand

VARIATIONS IN CONSCIOUSNESS - Is this reality or just someone’s imagination of reality?. variations in consciousness.

Chapter 13: - . supply chain performance measurement. learning objectives - after reading this chapter, you should be