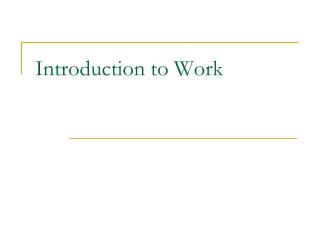 Introduction to Work. Announcements. Post test is due tomorrow. Energy and Work. A body experiences a change in energy when one or more forces do work on it. A body must move under the influence of a force or forces to say work was done.

Chapter 5 Enzymes What are enzymes? and How do they work? - . 5.1 introduction to enzymes. enzymes are catalysts what

Being GREEN at home and at work… - . amanda gourgue, cmp amanda@startameetingrevolution.com. agenda. introduction about

Introduction to UML - . cs a401. what is uml?. unified modeling language omg standard, object management group based on

Introduction to I/O Psychology - . what is i/o psychology?. a branch of psychology that applies the principles of