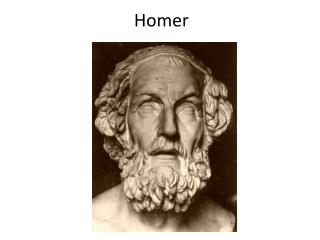 Homer . The Iliad and The Odyssey. These stories date from around the 8th century BC. Myth, legend, history. Paris takes Helen from Sparta to Troy. The Greeks lay siege to Troy. Why go?. Money and glory. Will my name be remembered?. Achilles ... Priam ... Hector . Homer - . cole griffin. the homeric question. concerns the debate over homer and the works of homer who was homer? under

Homer - . the man. lived in pre-classical period of greek history and culture wrote of myth and folklore passed down

Homer - . the man. lived in pre-classical period of greek history and culture wrote of myth and folklore passed down

Homer - . 8 th century bc. background. very little is actually known about him, but we do know his parents were epikaste

homer - The simpson family are the most unusual family ever you wouldn’t believe it them there are 5 of them. homer.

Homer - . - the writer of two epic poems – the iliad and the odyssey - venerated through all western history since it

Homer - . not much is truly known about homer, but it is known that he lived in the 9 th century b.c. homer is known to

HOMER - Virtual odyssey . thus begins the great, epic poem the "odyssey" by homer. in this introductory

Homer Simpson - . married to marge. he has 3 children. lisa

Mark Homer - . rob moore. “the unsheathed truth behind uk property economics and why supercharged returns are