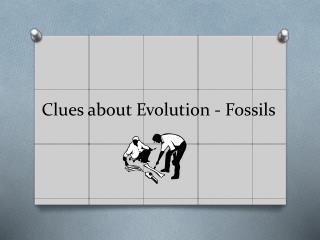 Clues about Evolution - Fossils. 1. Define the 5 types of fossils. Mineralized Fossils – minerals can replace wood or bone to create a piece of petrified wood or mineralized bone fossil. Chapter 16 - . darwin’s theory of evolution. ____ 1. darwin noticed that many organisms seemed well suited to a. being

Fossilization and Fossils - . so what exactly is a fossil?. any evidence of ancient life. body fossil teeth or bones

The Fossil Record - . section 17–1 this section explains how fossils form and how they can be interpreted. it also

12.2 Fossils: Evidence of Past Life - . on page 67 of your notebook, draw the following table: after we have completed