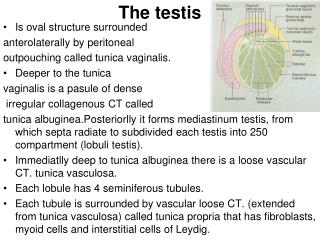 The Male Reproductive Testis - . what a re they?. two glands that are suspended within a sac that hang outside of the

Disorders of the testis &amp; spermatic cord - . ectopy &amp;cryptorchidism in ectopy the testis has strayed

Torsion of the testis or of the spermatic cord - . the right testis, exposed by laying open the tunica vaginalis.

Abnormalities Of The Testis And Scrotum Ahmed Al-Sayyad - . embryology. testicular differentiation is initiated in the