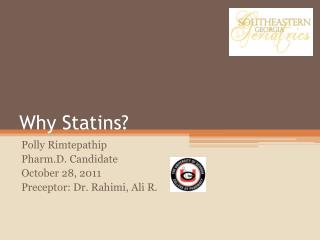 Why Statins?. Polly Rimtepathip Pharm.D. Candidate October 28, 2011 Preceptor: Dr. Rahimi, Ali R. Background. Coronary heart disease (CHD) is the leading cause of death in the US, causing one in every six deaths in the US.

MYTHS- CHOLESTEROL ,HEART ATTACK and STATINS - . most people react to being told they have high cholesterol in the same

Aspirin and Statins for primary prevention What is new and d oes gender really matters ? - . dr tali porter , head of

THE POSITION OF STATINS IN THE NEW GUIDELINE - . suroto dept of neurology, fac of medicine, sebelas maret university.

Bacon will kill you, But damn is it delicious! Here’s to more S tatins ! - . how do statins work?. hmg- coa reductase

Who should have statins - . 18 th march 2013. statin vs control – proportional effects on major vascular events per

Statins - . pharmacology, indications, side-effects and everything else!. what is cholesterol? what is it’s function?.