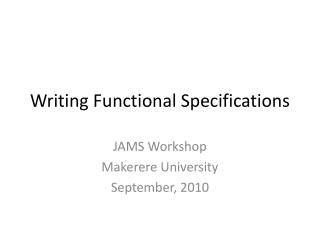 FUNCTIONAL WRITING - . how to write instructions!. why are instruction so important?. have you ever been to ikea? do they

Functional Writing - . writing to inform. the four elements of a good report:. include only factual information. write in

Transactional and Functional Writing - . diary entry. this is a personal record of your experiences , thoughts and

Specifications - . the most important thing you will ever build will be your reputation!.