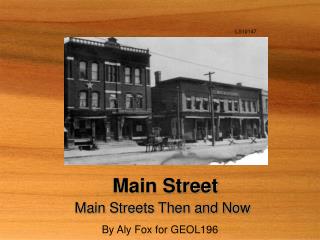 Using “On the Map” as part of the Main Streets Program - . by burt samuelson ulster county planning board may 2010.

Madison - . rising sun. elkhart. what is the mission of indiana main street?. to encourage economic development,

The Monsters Are Due on Maple Street - . as you view the powerpoint, be considering predictions and questions you may

What’s Happening on Main Street Montana - . main street montana project presentation given at the league of cities and