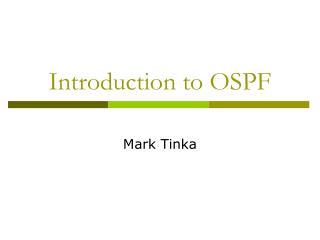 Introduction to Blogging - In university communication external relations (u of r) april 28, 2005 presented by alec

Single Area OSPF - . (ccna 3). notes. configuration of ospf is easy. the concepts and theory that make it a robust and

Chapter 11 - . open shortest path first ospf. note for instructors. these presentations are the result of a collaboration