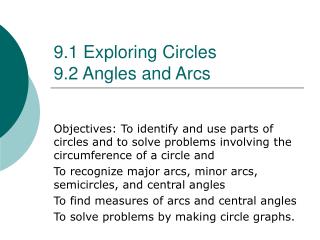 9.1 Exploring Circles 9.2 Angles and Arcs. Objectives: To identify and use parts of circles and to solve problems involving the circumference of a circle and To recognize major arcs, minor arcs, semicircles, and central angles To find measures of arcs and central angles

Calculating Sun Angles - . today you will calculate the angle of the sun at noon (12:00) for different locations on

The Circle - . length of arc in a circles. area of a sector in a circle. mix problems including angles. symmetry in a

Tangents to Circles ( with Circle Review) - . essential questions. how do i identify segments and lines related to

Right Triangle Trig - . section 4.3. right triangle trig. in the previous section, we worked with: angles in both radians

Circles - . chapter 6. essential questions. how do i identify segments and lines related to circles? how do i use

Understanding Elementary Shapes - . introduction. all the shapes we see around us are formed using curves or lines. we

Chapter 2-5 Review - . drafting 2-4. chapter 2. sketching and lettering. vocabulary. **** you should write these down and

Exploring the U.S.A. - Exploring the u.s.a. what do i already know? how many of the 50 states can you name? locate on a