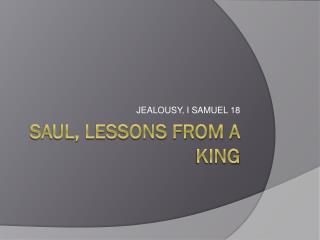 JEALOUSY, I SAMUEL 18. Saul, Lessons from a king. What is Jealousy?. The Bible makes it clear that there are two different types of Jealousy 1. God’ Jealousy: This is in relation to God’s demand for total loyalty from His people. The Life of King Saul - . the life of king saul is a tragedy we can learn from. we have both good and bad examples to

Lessons Learned from Israel’s First King - . “then saul said, ‘i have sinned. return, my son david, for i will not

Lessons From The Life Of King Solomon - . wisdom is the principal thing. 1 kings 3:5 at gibeon the lord appeared to

From Saul to Paul - . how the flawed and imperfect lead. top-ten reasons to come to the m ens r etreat. 40 hours of

Lessons From A Failure - . for demas has forsaken me, having loved this present world, and has departed for