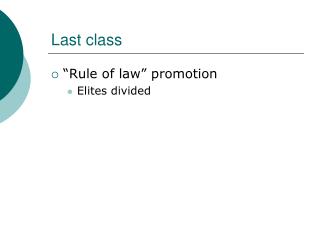 Last class. “Rule of law” promotion Elites divided . Today: Ideology . What is an ideology A belief system that specifies the nature of the “good society” and how to achieve it Not “testable”; not subject to evaluation based on evidence. 2. Ideologies.

From last class— Introduction of new ideologies in 20th C - . searching for a new concept of good society how to

SIT IN YOUR 4-PERSON GROUPS FROM LAST CLASS- Pick up a handout for today - . objective: i can prepare for the quarterly

Review from last class - . what is meant by the terms: 1. linguistic competence 2. linguistic performance what is

Last Class (Before Review) - . last class!. this is our last class on substantive, new material (next time is the