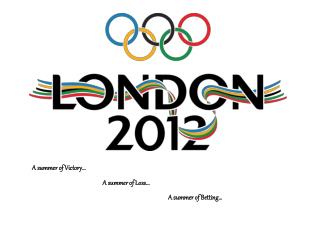 A summer of Victory…. A summer of Loss…. A summer of Betting…. What was the impact of the London 2012 Olympic Games on the Betting Industry?. By Group 19. T he B etting I ndustry…. On the Water: 7 Amazing Summer Activities - Https://www.boatsetter.com/ - explore the top 7 activities for adventurous

All Summer in a Day Ray Bradbury - . demos 2010. before you read. have you ever known somebody who just didn’t fit in?

BED IN SUMMER by Robert Louis Stevenson In winter I get up at night - And dress by yellow candlelight in summer, quite

Army Cadet Summer Training - . outline. what is army cadet summer training? what courses are available? who can attend?