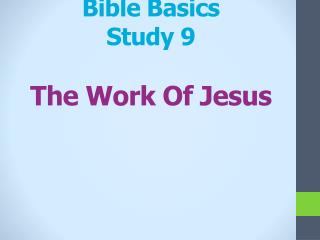 Bible Basics Study 9 T he Work Of Jesus. www.biblebasicsonline.com www.carelinks.net Email: info@carelinks.net. 9.1 The Victory Of Jesus Jesus Never Sinned. He was "in all points tempted as we are, yet without sin" (Heb. 4:15). How Did We Get the Bible? - . how we got the bible. lesson one: divine inspiration &amp; the formation of the old

How Did We Get the Bible? - . how we got the bible. lesson one: divine inspiration &amp; the formation of the old

The Bible: Are There Errors? - . â€œthe bible is a product of man, my dear. not of godâ€¦. man created it as a

Basic Rules For Understanding The Bible Properly - . focus upon the bible is very important. this in no way lessens what