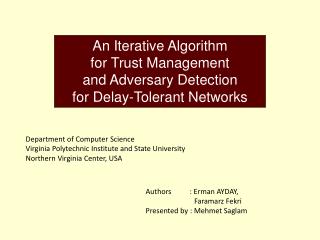 Delay-Tolerant Networks - . acknowledgements: most materials presented in the slides are based on the tutorial slides

Chapter 19 : Recursion - . objectives. after studying this chapter you should understand the following: recursion, and

Determination of Water by the Karl Fischer Titration: Theory - Motivation volumetric kf titration one an two-component

Chapter 2 Iterative Techniques in Matrix Algebra - . in this chapter, we present iterative methods to solve a system of n